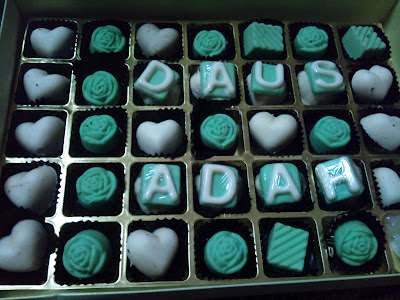 *Thank You Allah~!
Posted by Saadah Khair No comments:

Email ThisBlogThis!Share to TwitterShare to FacebookShare to Pinterest
Labels: 7997, wordless

In the Name of Allah, the Most Gracious, the Most Merciful

The Day is coming nearer. 10 days left to change the marital status from single to a married life. Honestly speaking, I feel like it's just a dream because I am still the same person; clumsy and childish.

Each person has a dream to be happy. Although my own name can be defined as a HAPPINESS, I'm trying to find and create my own happiness, of course for the sake of Allah.Prof Naquib al-Attas said that Sa'adah can be understood by understanding its opposite which is Shaqawah - rendered into English approximately equivalent of ‘great misfortune’, ‘misery’, ‘straitness of circumstance’, ‘distress’, ‘disquietude’, ‘despair’, ‘adversity’, ‘suffering’. Happiness as mentioned in the Quran not only refer to secular realm, but importantly towards the spiritual realm, because attaining happiness is not an end in itself as the purpose of that is directed to God - Love of God that directed to the Hereafter, related to self both body and soul that is not in the state of doubt. (Refer HERE)

Therefore, to be happy is not only for this world, but for the Hereafter.

In addition to that, I just wanna share 10 tips to a Happy Marriage (similarly not in the world only, but forever in the Paradise), as Allah said: “Enter Paradise, together with your spouses, and rejoice." (Surah al-Zukhruf, 43: 70)

TIPS 1: Fear Allah SWT.
It was the noble practice of Rasulullah PBUH to remind the spouses about the fear of Allah before performing a Nikah by reciting the verses [al-Nisa: 14, al-Ahzab: 69, Ali-Imran: 10) from the Quran. All the verses are common in the message of Taqwa (fear of Allah). The spouses should be first committed to Allah before being committed to their partner. There can be no doubt in the success of a marriage governed by the fear of Allah SWT.

TIPS 2: Never be angry at the same time.
Anger is the root cause for all marital disputes, One companion came to the prophet PBUH and sought some advise. The Prophet PBUH replied, "control your anger" (La Taghdab). The same advice was rendered three times.[Bukhari]. Narrated by Abu Huraira: Allah's Apostle said, "The strong is not the one who overcomes the people by his strength, but the strong is the one who controls himself while in anger.".[Muslim]

TIPS 3: If one has to win an argument, let it be the other.
The Prophet PBUH said: "Whoever discards an argument despite being correct, shall earn a palace in the center of Jannah" [Bukhari]

TIPS 4: Never shout at each other unless the house is on fire.
Luqman while offering advice to his son said: "and lower your voice for verily the most disliked voice is that of a donkey" [Surah Luqman: 19]

TIPS 5: If you have to criticize, do it lovingly.
The Prophet PBUH said: "A Mu'min is a mirror for a Mu'min" [Abu Dawud]. Advise with dignity and silently.

TIPS 6: Never bring up mistakes of the past.
The Prophet PBUH said: "Whoever conceals the faults of others, Allah shall conceal his faults on the Day of Qiyamah" [Muslim]. And please do remember that everyone makes mistakes and not perfect. In Islam, it is generally not recommended to dwell on the past. So it will be of more benefit if a person does not repeat or bring up the mistake which they had done in past.

TIPS 7: Neglect the whole world rather that your marriage partner.
The Prophet PBUH confirmed the advice of Salman to Abu Darda RA for neglecting his wife, "Verily there is a right of your wife over you". [An-Nasa'i]

TIPS 8: Never sleep with an argument unsettled.
Abu Bakar RA resolved his dispute with his wife over feeding the guests before going to bed. [Bukhari]

TIPS 9: At least once everyday, express your gratitude to your partner.
The Prophet PBUH said: "Whoever does not show gratitude to the people, has not shown gratitude to Allah" [Abu Dawud]

TIPS 10: When you have done something wrong, be ready to admit it and ask for forgiveness.
The Prophet PBUH said: "All the sons of Adam are vulnerable to a lot of mistakes; and the best among those are the ones who seek a lot of forgiveness" [Al-Tirmidhi].

I end with this Quranic verse. Allah said: “And among His signs is this, that He created for you mates from among yourselves, that you may dwell in tranquility with them, and He has put love and mercy between your hearts. Verily in that are signs for those who reflect.” (Qur’an 30:21)

Last but not least,

**O Allah, ease everything for me & my family.
Posted by Saadah Khair No comments:

Home: Its Etiquette from Sunnah Perspective

Once in a time, I read a very beautiful quote says that "A house is made of walls and beams; a home is built with love and dreams."  There are differences between a house and home.

Benjamin Franklin said: "A house is not a home unless it contains food and fire for the mind as well as the body". Thus, which one do you prefer?

In Islam, home is the place that we enjoy every moment with the beloved ones. The Quran teaches Muslim how to ask permission to enter house and command to respect neighbor. The Prophet PBUH also supports this matter in his Prophetic Traditions. especially mentioned about the etiquette in new house as discussed by Muslim Scholars.

Here are some etiquette of moving into the new house according to the Sunnah.

First and foremost be grateful for the blessing of Allah, because being grateful is one of the noblest of  deeds. Indeed it is Allah alone that has blessed you and if you are thankful, Allaah will increase you even more in His blessings. Allah says: “And (remember) when your Lord proclaimed: If you give thanks, I will give you more (of My Blessings); but if you are thankless (i.e. disbelievers), verily, My punishment is indeed severe” [Surah Ibraaheem:7]

Someone asked Sheikh Saalih al-‘Uthaymeen what a person should say if he enters his home. He said:
“Praise be to Allah. When a man enters his house, he should say….
أعوذ بكلمات الله التامَّات من شر ما خلق
'(I seek refuge in the perfect words of Allah from the evil of that which He has created)’ three times. If he says this, then nothing will harm him until he leaves that place.”

Also when the Prophet PBUH something that he liked, he would say:
الحَمدُ لِلَّهِ الذِي بِنِعمَتِهِ تَتِمُّ الصَّالِحَاتُ
(Praise be to Allaah by Whose grace good deeds are completed).” (Ibn Maajah)

There is also another Du'a, from the Quran, Allah says:

رَبِّ أَنْزِلْنِي مُنْزَلًا مُبَارَكًا
"My Lord, let me land at a blessed landing place, and You are the best to accommodate [us]." [Surah al Mu'minun: 29]

3) Say Bismillaah and prevent the Shaytaan from entering:

That is because Allah said in the story of the two men in Surah al-Kahf:  “It was better for you to say, when you entered your garden: ‘‘Ma sha’ Allaah la quwwata illa Billaah (that which Allaah wills (will come to pass! There is no power but with Allaah)’ If you see me less than you in wealth, and children” [Surah al-Kahf:39]

Ibn al-Qayyim said: “The one who enters his garden or house and sees something that he likes in his wealth or his family should hasten to say these words, and if he does, no harm will befall the thing that he admired.”

5) Protect your house from Envy and the Evil Eye:

One of the ways in which you can seek protection for your new house from the evil eye and envy is to say what the  Prophet PBUH taught us.
أُعِيذُكَ بِكَلِمَاتِ اللهِ التَّامَّةِ مِن كُلِّ شَيطَانٍ وَهَامَّة ، وَمِن كُلِّ عَينٍ لَامَّةٍ

(I seek refuge for you in the perfect words of Allah from every devil and poisonous reptile, and from every envious evil eye).” (Bukhaari)

Reading this blessed Surah will drive the Shayaateen away from your house. The  Prophet PBUH said: “Do not make your houses into graves, for the Shaytaan flees from a house in which Surah al-Baqarah is recited.” (Muslim)

Shaykh Ibn Baaz said : “It seems – and Allaah knows best – that by means of the reading of all of Soorat al-Baqarah, either on the radio or by the owner of the house, that which was mentioned by the Prophet (Sal Allaahu Alaiyhi wa Sallam) may be achieved, namely Shaytaan fleeing from that house. (Majmoo’ al-Fataawa)

This shows us that any way that the reading is achieved is sufficient, be it reading it yourself or playing it on the CD, radio, etc.

Make food and invite people to come and eat, because that is a way of showing gratitude to Allah. The Ulama tell us that holding a feast after acquiring property is called “wakeerah” and it is mustahabb (recommended) to do so, like all kinds of feasts that are given on happy occasions.

8) Stay away from innovations:

There is no proof in the Qur’aan or Sunnah that justifies holding Qur'aan Khwaanis or ‘Khatams’ of ‘Yaa Salaamu’, etc. when a person moves to a new house. We don't have any authentic reports about the Prophet PBUH or the Companions reading the different parts of the Qur'aan or holding Khatams when they, for example, migrated to Madinah and moved to new houses. As a matter of fact, they didn't do this EVER, at any part of their lives, whether they moved or not moved.

Also there is no proof in the Shari'ah of other innovations that people have invented when they first move into new houses such as taking the Qur'an, or taking water and salt before anything else into their new house, burning chilies at the doorstep, etc. That is all superstition and thus forbidden.

Sheikh Ahmad Kutty, a senior lecturer and an Islamic scholar at the Islamic Institute of Toronto, Ontario, Canada, states: "Adhan (call to prayer) is a form of Dhikr (remembrance of Allah); it has been prescribed as a summons to prayer for the specific purpose of informing people of the arrival of the time of Prayer.

While mentioning the specific benefits of Adhan, the Prophet PBUH said that it drives away the Satan while eliciting positive responses from good spirits.  Since Adhan is a form of Dhikr, there is nothing wrong if a person calls Adhan before settling down in a house-- if his intention is simply to drive away devils-- although ideally it would have been better for the person in question to gather his own family members and pray two Rak`ahs of Nafl (supererogatory) prayer thanking Allah for His favor, and read parts of the Qur’an.

However, simply calling Adhan before occupying a house will not guarantee that the house is protected against devils.

InsyaAllah, I'm moving to a new house that I will make it a Home for us build new happy life together. May Allah make everything easier for me. Please bless our Home...

**Only Allah knows how difficult to get a Home.
Posted by Saadah Khair No comments:

Email ThisBlogThis!Share to TwitterShare to FacebookShare to Pinterest
Labels: sharing 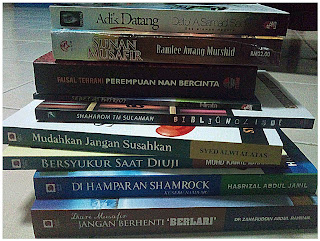 Email ThisBlogThis!Share to TwitterShare to FacebookShare to Pinterest
Labels: wordless 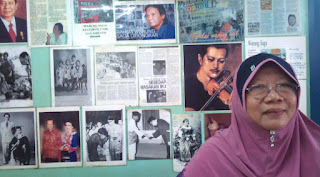 Email ThisBlogThis!Share to TwitterShare to FacebookShare to Pinterest
Labels: 7997, puisi
Newer Posts Older Posts Home
Subscribe to: Posts (Atom)
Dear Readers,
This blog is my personal blog based on my own experience, expectation and opinion, to complete my journey of life. If there is something you disagree with me, please advice me wisely. I'm trying my best to act, think and write wisely because my journey begin with a good intention and hopefully it will end with the best ending at the Hereafter. 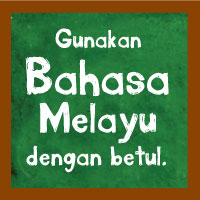 Be a good wife. A lovable one.

Be an excellent & educated mother.

Be HEALTHY. Take care of the body.

Be POSITIVE. Stay away from negativity.

GIVE & GIVE. We make a life by what we give.

Expect nothing. Appreciate everything.